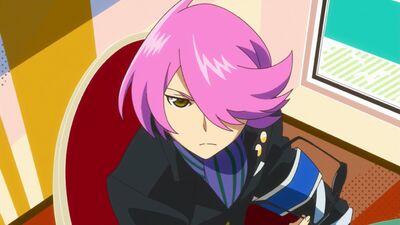 Jiro Hitoyoshi (人吉 爾朗 Hitoyoshi Jirō) is a member of the Superhuman Bureau. He was told he was a human by his foster father, Magotake Hitoyoshi.

Jirou has golden eyes and short, lilac hair that covers his left eye. He wears a black suit with what looks like a black and blue striped scarf. The suit also has red plaid cuffs. On Jirou's left arm are white straps and his left hand seems to be bandaged. His left arm is able to use something like a laser, or some type of a fire-like element to defeat enemies. In the opening animation, it is shown to be able to sprout gun-like barrels and shoot fiery bullets.

In appearances after he has left the Bureau, he wears a black shirt with a star on it. He also wears a red scarf like those worn by sentai heroes.[1]

In an interview it is said that the hair covering Jirou's eye has no relevance to the plot, it's just to look cool.

He has the power to cheese and control large crimson flames from his arm. He's also a certified cool dude. His car can transform into a iron horse.

EQUUS -The all-purpose machine ridden by Jito Hitoyoshi, the protagonist. Known as a “Kikai (machine),” it starts up as a super-car that courses the public roads at ultra-high speed to get to the scene of a crime. It is equipped with various weapons and fights with gigantic monsters and aliens.

He was born in the 20th year of the Shinka era and Magotake Hitoyoshi took him in that year. Dr Hitoyoshi then raised him.[2][3]

(A young man in his early twenties, who in spite of being an average human being, belongs to the “Superhuman Bureau” and solves crimes. Believing strongly in justice and goodwill, he uses his power for the benefit of society and continues his fight to protect “super humans.” An orphan whose circumstances of birth are unknown, he was raised as the adopted son of Professor Magotake Hitoyoshi. Born in the 20th year of the Shinka Era, young Jiro’s code of conduct underwent great changes around the 41st year of the Shinka Era and the 45th year. What happened during that time? As we go back and forth through these periods, the story brings into relief the hidden truth of the “superhuman”...)

Jiro was working for the Bureau as its number 1 superhero until he left at an unspecified time, due to his beliefs about superheroes having been crushed. [1]Between about the 41st to the 45th year of the Shinka era, his behavioural principles were changed greatly.In April, the 53rd of Shinka Era, in Shinjuku, it was revealed that he is a beast.[2] During the GaGon case, he starts calling Kikko by her first name.<ref>Concrete Revolutio ep 5</ref