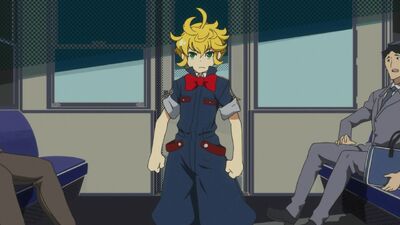 Fuurouta (風郎太, Fūrōta) is a member of the Superhuman Bureau, and an obake ("ghost" in the Funimation subtitles).[1] He is attracted to Kikko Hoshino.

Fuurouta looks like a young boy, but his age is unknown.[2] He is unable to age. He is able to take the form of a dog, a bird, a balloon, a fly and many other objects/animals.[1]

Fuurouta has messy yellow hair and lime green eyes. He wears a baggy mechanic suit with a yellow star on the back and a red bow tie on the front. The sleeves are rolled up and held in place with light brown straps. His outfit also consists of a white collar, red and black shoes, and pockets.

Fuurouta has a simple-minded childlike personality, which is evident when he uses his phasing abilities to detect which icy-poles had "winner" sticks. He also likes playing pranks on kids.[1]

He looks young and carefree, but his actual age is unknown. He loves playing childish pranks on people, and is stuck forever with a child's body and personality. Jirō recommends him in joining the Superhuman Bureau.He was apprehended by Jiro in a particular case and subsequently became a member of the Superhuman Bureau. He is attracted to Kikko.

He has the ability to transform into a beast and hover over the air. A so-called “ghost,” before joining the Superhuman Bureau, he amused himself by using his abilities to play pranks on children.

Phasing: A ghost who can change shape at will and phase through inorganic objects.

Transformation (morph): He is able to transform into various animal forms as well as a balloon form. He is also capable of transforming into other humans, as well as partially transforming himself (as shown when he transformed his head into Jirou's).[3]